Back to Upcoming Events

Lennie Gallant, in partnership with the City of Charlottetown and Wintertide Holiday Festival, will be presenting "The Innkeeper's Christmas Concert" at Trinity United Church in Charlottetown on November 28th at 8:00 pm with special guests and also featuring members of the Atlantic String Machine, Patricia Richard, Sean Kemp, Jeremy Gallant and Jonathan Gallant. This promises to be spectacular evening of Christmas music in the magical acoustic setting that is Trinity. The concert is named after the artist’s much loved Christmas song, 'The Innkeeper'’. The song is a redemption story told from the point of view of that rather unsavoury character who turns the anointed couple away in their hour of need in the original nativity tale. The concert will feature original Christmas songs penned by the prolific artist for a new project, including his song "Christmas Day on Planet Earth", that he wrote to perform with the fabulous world music band from Zimbabwe, Black Umfolosi (see YouTube video below), as well as some songs from his latest album, "Time Travel", and his brand new Francophone project with Patricia Richard, "Sirène et Matelot".

Tickets purchased online or by phone may be picked Monday to Friday 11am to 5pm at the Eastlink Centre Box Office or 30 minutes prior to the show at Trinity United Church. Phone and online sales an add'l $1 plus HST.

NO REFUNDS OR EXCHANGES 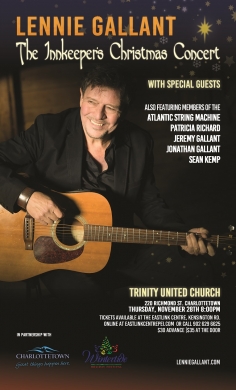